I’m sat in Dream Wife’s cold and dark touring van with Rakel Mjöll (singer), Alice Go (guitarist) and Bella Podpadec (bassist) talking about the special connection they have with their fans, safety at gigs and other Bad Bitches related topics. The only light the van has is this small colour changing light which Bella cleverly hung from the ceiling of the van. It doesn’t give much light and I can’t read my notes anymore, but that’s okay, the London based trio doesn’t mind to do most of the talking. 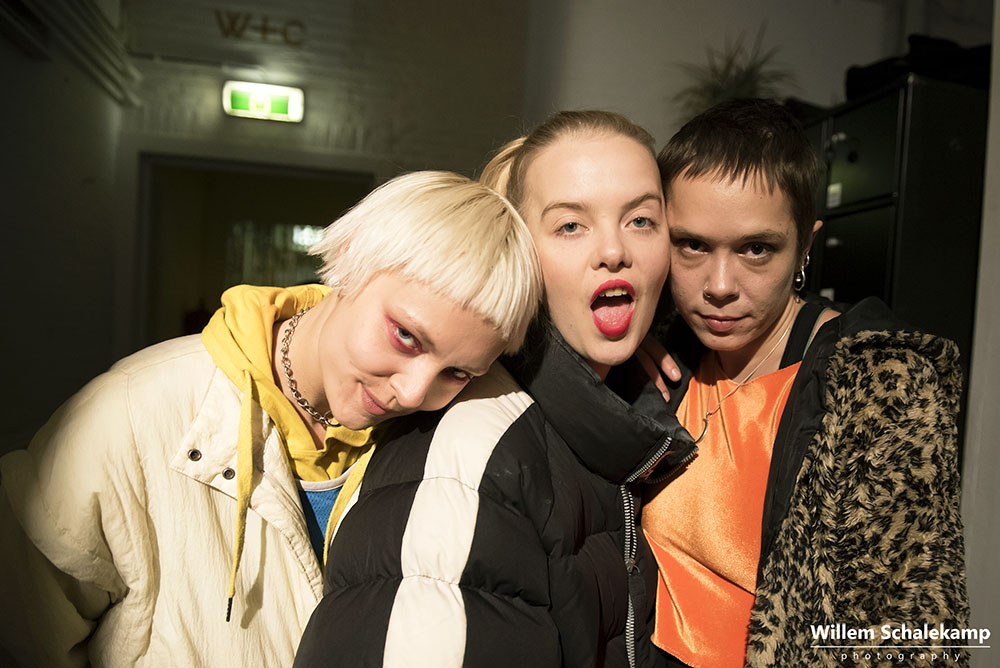 All cosied up, Dream Wife start talking about their current album release tour. Their self-titled album has only been released about two months ago. Yet, during the time of the release Dream Wife was in Australia, not quite aware of how the album was received in the UK and Europe. When I spoke to them, just before their show in Rotterdam hosted by Girls Go Boom, they were halfway their tour and not quite used to people singing along to the songs they’ve just released yet, but they are definitely loving it.

Dream Wife are signed to the label called Lucky Number, which is an independent label. Because of this, Rakel says, the people around Europe who have been helping and supporting them are doing it out of passion rather than doing it because they have been told to do so. Especially around Europe it has been really special for them since they hadn’t played in many of these cities before. Yet many shows were sold out and many people are singing along. It’s been a special experience to them so far. To Dream Wife, fans are really special. They get plenty good reviews online which they obviously like, but having fans coming up to them after live shows telling them how much Dream Wife has meant to them is something entirely different. ‘It is incredible, playing your album and having a face-to-face interaction of feedback’, Rakel says. To which they all start discussing how emotional their shows are. ‘The shows have been emotionally powerful so far’, Alice concludes. After seeing their live show, I can only agree with that.

If I had to summarise a Dream Wife live show in three words I would say; energetic, empowering and emotional. Since my first time seeing Dream Wife live I have been wondering how they survive on tour, putting so much energy in every single live show. Their main answer to that; ‘water, lots of water’. They all praise a healthy lifestyle on tour, but they are still learning to put it into practice. They’ve learnt a lot from touring with two bands they have always looked up to, Sleigh Bells and The Kills. They were so inspired by the way they approach every single live show. They treated their tours as if they were going to run a marathon. Dream Wife has now started to treat themselves as athletes on tour as well. ‘We want to be able to perform physically as well as we can and you just can’t do that when you’re drunk every night. It’s about choosing when to party, rather than partying every night’, Bella says. Dream Wife are generally not a fan of the view on alcohol use in the music industry. Rakel mentions that early in their music career someone told them that this one band had a lot of fans because they party with their fans all night, every night. Dream Wife are not that kind of band. They prefer having meaningful conversations with their fans and they in no way or shape want to glorify excessive alcohol use. ‘It’s just some outdated cliché that in the rock, or music industry in general, it is normal to drink so much’, Alice mentions. Dream Wife agrees more with a different movement, which is more on the surface in this generation, towards self-care and looking after yourself. They try to be as stable as they can in order to give a great live show every night. This is definitely something they have learnt from their heroes Sleigh Bells as well. ‘It was great watching them because they have been doing this for a while. What we received from them is that they were so grateful and they were really in the night. They were present in a different way. It was so nice to be with this band, who are complete rock heroes to us and to see how present they were at their shows. Just because they were taking care of themselves and of each other’. To see a band that has such a good chemistry and family kind of feeling, even after five years of touring, was so nice to see for a young band like Dream Wife. To see how a band can sustain throughout the years, gives them an idea how they can manage to this is for a longer period of time without wearing themselves down.

Rakel, Alice and Bella met each other at art school in Brighton where Dream Wife originally started off as an art project. 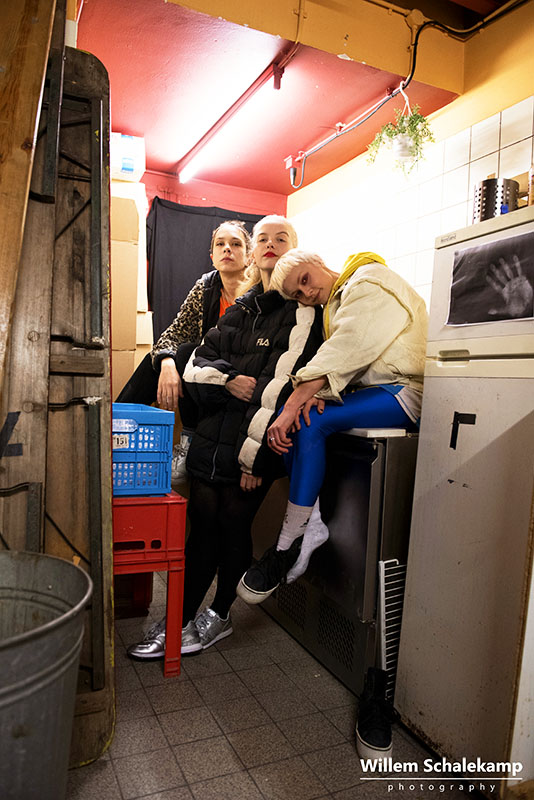 The art school influences can still be found in the fact that they design their own  merchandise, which is mainly Bella’s task. For the pre-orders of the album Bella even made a zine. ‘The zine is a comic’, Bella explains. ‘It is a semi-fictitious account of the end of our first tour. We broke into a pool when we were in Portland’.  The comic is actually a final part of a series Bella was doing where she would write fan fictions about stuff her friends were doing. After around twelve of these, she decided to make one about the band and they put them with the first batch of a thousand pre-orders as a limited edition extra. The zine might be send out as a pdf version on their mailing list in the near future. As Bella is often drawing (or knitting) in the van, Alice is more a fan of coding and is currently working on creating a cryptocurrency with the idea of using it for their merchandise. The idea is that it would be another way for Dream Wife and their fans to connect on a deeper level, by even having the exchange of money be something special and exclusive to Dream Wife. It allows them to have a new way to engage with their fans, outside of the conventional ways of doing so.

At their university, they met photographer Meg Lavender. On Dream Wife’s last tour Meg went with them, initially to take photos of them. However, she started to document the Dream Wife fans as well. ‘She’s got this real knack of really empowering people and showing them a different side to themselves’, Bella and Rakel tell me. Dream Wife was really into this, because this was for them an important and empowering way to engage with their fans. Throughout the whole interview, Dream Wife continuously make clear how important the fans are them. The Bad Bitch Club, which is what Meg’s project of documenting Dream Wife’s fans is called, was for Dream Wife a way to honour their fans. By creating an atmosphere with the Bad Bitch Club, they also try to lower the boundary for people at gigs to meet each other. By playing a gig, they feel like they are also creating a community. This way it is also easier to create a safe space. On the same tour that Meg Lavender joined them, Dream Wife collaborated with an organisation called Girls Against. Girls Against fights against sexual assault at gigs, by making sure the gigs are safe spaces. During the collaboration with Dream Wife, this mainly entailed them talking to the venue staff, so they knew how to act. They also hung posters in the venues to create awareness. Dream Wife finds this very important. They want everyone in their crowd to be respectful. Equally important to Dream Wife is to get everyone who’s female identifying to the front, to be together and have a great time and dance together, without any fear. Nearing the end of every gig, Rakel makes sure to get all the girls to the front. For at least the two front rows to exist of girls, creates a safe space and respect across the room. Everyone in the crowd, even men, seem to agree and respect this as well. The crowd generally just thinks it is fun. Which is great.  As for the ones  who don’t seem to understand, other men call them out on it. Which is exactly the type of behaviour Dream Wife wants to see. That is people ‘supporting their local bad bitch’, which is the message the newest Dream Wife merchandise carries as well.

There is no such thing as a dream wife

The interview concludes itself by Dream Wife claiming, there is no such thing as a dream wife. ‘A dream wife was this high expectation on women in the 50s and 60’, Rakel explains. ‘It made women an item, a package deal that a man could get. Having a dream job, a dream house, a dream car and then a dream wife. Suddenly she becomes an object’. Dream Wife like to play around with this. They tend to try to break stereotypes of what women are and what they can be, both in their live shows and on their album. The whole album is basically showing different types of womanhood. From angry to sensitive. ‘It’s fun’, Rakel says. No one who sees Dream Wife live would ever question if their having fun. 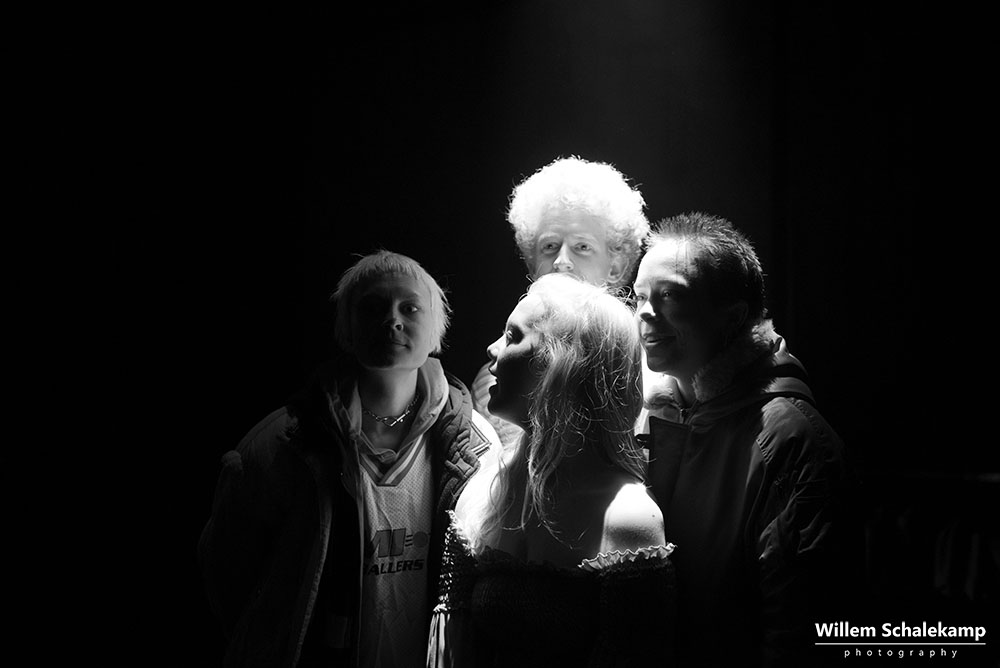 The van was actually freezing and shaking in the wind. The sleeping bags used as blankets, and Dream Wife’s beloved new coats could not keep us warm much longer. We quickly ran back to the venue and later that evening Dream Wife put on a killer live show. As they always do.